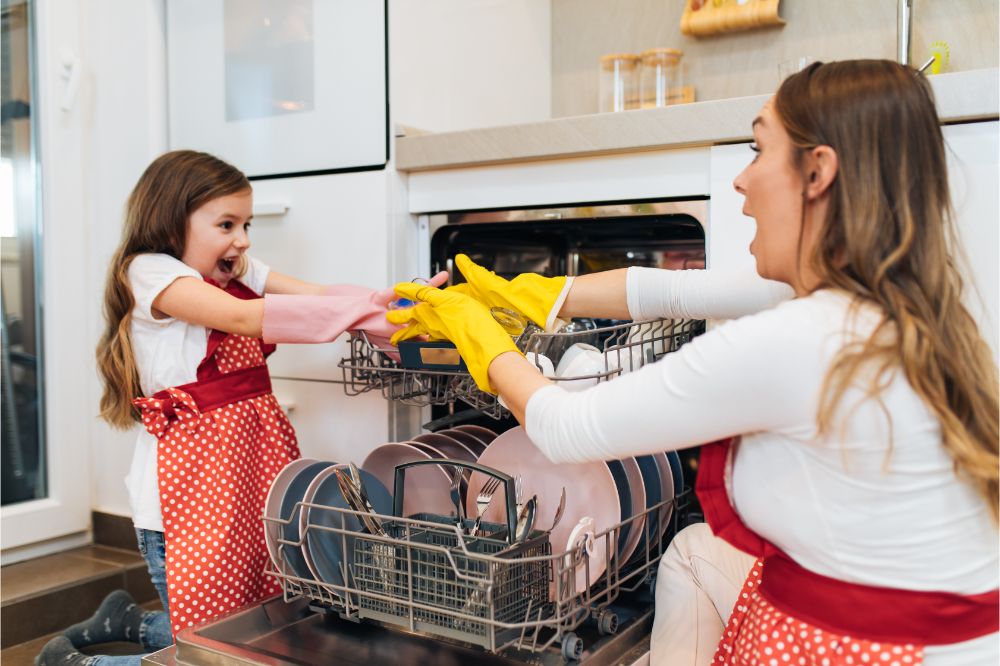 Throughout its 170-year history, the dishwasher, which is one of the most well-known kitchen appliances, has been put through plenty of iterations. But when was the dishwasher invented?  Joel Houghton created the very first patented dishwashing machine in 1850. It consisted of a wooden box that made use of a hand-turned wheel that used a water source to spray water on dishes, and it even included scrubbers.

L.A. Alexander, an inventor, improved on the original machine from Houghton 10 years later by introducing a gear-operated mechanism that let an individual spin dishes on the rack through a tub of water. However, the person that we truly have to thank for the dishwasher we know and love today is a woman by the name of Josephine Cochran.

Her design was the very first to make use of water pressure rather than scrubbers to clean the dishes, and this made it quite a bit more efficient than Alexander’s or Houghton’s versions. In 2006, Cochran was inducted into the US National Inventors Hall of Fame for her invention.

Josephine Cochran’s frustrations with dishwashing started when she married William Cochran, a wealthy merchant, in 1858. It was expected of her to hold regular dinner parties due to her status as a socialite, and she often served her meals on priceless heirloom china. The fragile china was frequently chipped when her household staff cleaned the dishes by hand.

Even when she decided to wash her own dishes, Cochran would damage them. So she decided to create a device that would take care of the task quickly and more carefully so that no delicate items were harmed. She vowed that if no one else was going to invent a machine to wash dishes, she would do it herself. And she did.

Though Josephine did not have any technical experience, she was born into a family of inventors and engineers. John Garis, her father, used to be a civil engineer that supervised several mills at the Illinois Ohio River. Her great-grandfather was responsible for the invention of the first-ever steamboat to be given a United States patent.

She developed her first prototype at the back of her house in a shed in Shelbyville, Illinois. Unfortunately, her distinct lack of formal education in engineering proved to be quite a problem, so she found someone who would be able to help her. A mechanic named George Butters decided to help her construct the first prototype.

In order for the machine to be able to wash dishes effectively, Cochran measured all of the dimensions of her cups, saucers, and plates and created wire compartments for her china to fit into. These compartments would separate each item of dishware, and there was a container on the bottom of the dishwasher that housed soap.

These compartments were situated within a wheel that was flat inside of a copper boiler, with a motor powering it. It could turn as soapy water sprayed onto the dishes, cleaning them. In 1886, Josephine was granted a US patent, and she named it the Cochran dishwasher. Local papers advertised her invention. She also built some for her family and friends.

Josephine Cochran Was a Businesswoman

In order to grow the market for Cochran’s machine, she created the Garis-Cochran Manufacturing company in Shelbyville in the 1890s. In 1897, the company became Cochran’s Crescent Washing Machine Co. It assisted her in connecting not only with hotels and restaurants interested in purchasing her machine but with wealthy investors as well.

Many prospective investors requested resignation from Cochran so that the company would be sold and owned by a man. She refused time and time again and would continue to provide funding to the business on her own. Josephine put her machine on display in the Chicago World’s Fair of 1893 to boost her sales, and it was there that she received an award for the dishwasher’s durability and design.

Thanks to this exposure, she was soon flooded with orders and was able to open up a manufacturing facility in Chicago. Her dishwashing machines became immensely popular in the hospitality industry, though it was not until the 1950s that dishwashers became popular with the public. Many homemakers said that they preferred to wash dishes with their hands. And the dishwashers left a soapy residue on the dishes.

Many homes constructed prior to the 1950s used furnaces to create hot water. At the time, not all of these furnaces were able to heat up enough water to the right water temperature needed to run a dishwashing machine. However, thanks to the changing attitudes toward housework and technology, the dishwasher grew in popularity over time.

Cochran died in 1913 and did not get to see her machines become popular sought-after appliances. KitchenAid (now part of Whirlpool) acquired her company in 1926.

How Has the Dishwasher Changed the World?

Until the 1950s, the dishwasher was a luxury appliance. American homes started to use dishwashers as necessary appliances in the 1970s. And now, more than 75 percent of homes in the country own one of these machines. What’s more, the dishwashers of today are certainly much easier to use than their vintage counterparts – they feature removable trays, pre-soak cycles, improved rotating sprayers, and racks.

A modern dishwasher is a fantastic appliance that would not have been possible without Houghton or Cochran. The Environmental Protection Agency’s US Department of Energy states that modern models save both energy and water. This conserves our natural resources and helps families pay less on their utility bills. Finally, dishwashers have also truly changed the way that we design our kitchens and modern homes in general.

The Benefits to a Dishwasher

Life is busy enough without spending time hunched over a sink washing your cups and plates. This is especially true when you consider your other household chores. On average, you spend 1 hour of every day washing up after meals. Whereas you spend just 9 minutes loading up your dishwasher. You can add another 51 minutes to your free time every day.

There are plenty of washing programs available on dishwashers that you can choose to suit your schedule as well.

You’ll save energy and water

Washing dishes by hand may seem like the way to go when you are trying to save water. But a recent study suggests that using a dishwasher can actually reduce your water consumption by an impressive 74%. You will save a lot of water.

The savings don’t just stop there – some consumer dishwashers use as little as 6 liters every cycle. Other dishwashers come with energy conservation features. They reduce water and energy consumption by 25%. This can go a long way in saving you money on your utility bills each month.

When did dishwashers become mainstream?

As we mentioned earlier, hotels, restaurants, and other hospitality businesses use dishwashers. But they were not a common appliance in regular households until the 1970s. It even remained a luxury appliance up until the 1950s.

Did dishwashers exist in the 1950s?

The short answer: yes. In fact, dishwashers existed in the 1950s – they had existed a century before then. But they were not a part of households until the 1970s. Up until that time, dishwashers were most popular with hotels and restaurants. They were also in other companies that needed to clean many dishes quickly. The residential dishwasher as we know it was not really popular until the 1970s.

When was the first electric dishwasher invented?

In 1940, electric washing and drying elements were added to dishwashers. And before that, the appliances were purely mechanical dishwashers and still required some form of human intervention to operate properly.