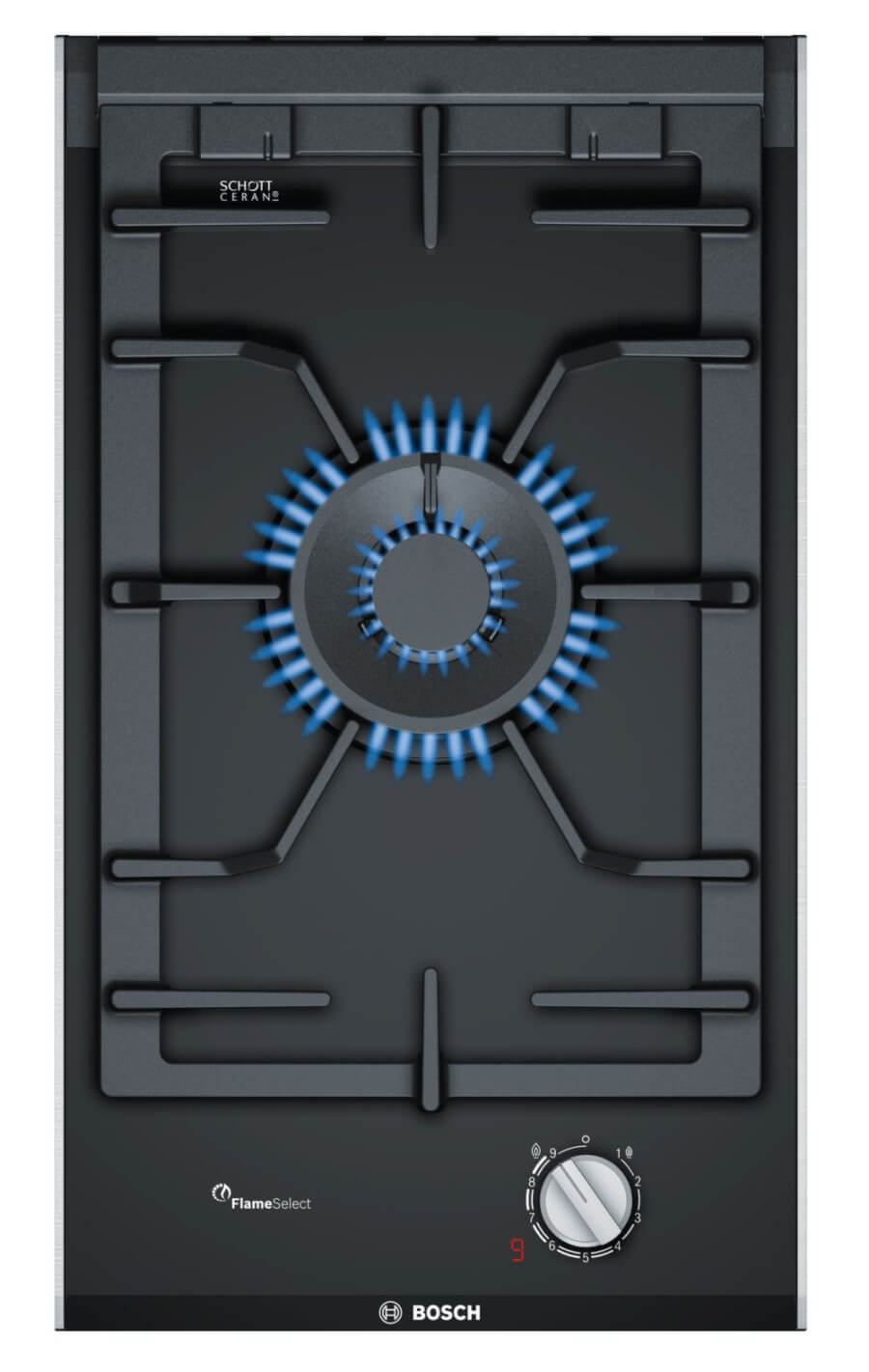 Domino hobs are designed as modern, often sleek-looking cooking appliances. They have an oblong shape, so they’re essentially rectangular in appearance but with an irregular form. This is because their shape depends on the features of the hob itself.

There are several different types of domino hobs. To clarify, these types of hobs get their name from their typically darkened or dark surface colour with a somewhat brighter foreground functional hob for cooking food. As such, they can resemble a domino playing piece. Therefore, a domino hob does not indicate it’s powered using LPG, natural gas, or electric specifically.

A domino hob may have an electrically powered induction top, a natural gas gas-powered hob with pan stands produced using cast iron materials, a BBQ grill hob, a wok burner or even a deep fat fryer. Indeed, it’s possible to have more than one domino hob in a kitchen to provide the ultimate in flexibility too. It’s completely up to you. The Klarstein Delicatessa is a sleek, glass-ceramic covered dual induction hob with up to 2,000 watts per cooking zone. It has an easy to use temperature slider to adjust the heat levels and gets hot very quickly to start cooking almost immediately. Also, a built-in shutdown timer avoids the hob staying on indefinitely when forgetting to turn it off.
Check Price On Amazon

The Klarstein Delicatessa is a dual induction hob which stands out from the crowded field. It uses Klarstein’s VarioHeating technology that lets you either use one or both of the hobs or to work with both to prepare a BBQ.

To facilitate the flexible use, the surface uses a glass-ceramic that’s clean, clear and smooth. Being an induction cooker, there’s the patterned design below indicating each heating zone. A “Flex Zone” black stripe across the centre marks the separation between the two heating zones – one is 2,000 watts and the other is 1,500 watts. As previously mentioned, the dual heating zones can be combined for cooking a BBQ. Not every induction cooker offers this feature; we’re sure it will become a favourite one over time.

The touch-sensitive, digital control system at the front of this domino hob is sophisticated but easy to use. There’s the BBQ VarioHeating feature on the far left and the power button on the far right. In between, there’s a countdown timer (for fixed cooking times and safety reasons) and digital controls for both hobs.

Whilst the normal kilowatt limit on the hobs is 1,500 watts on the front one and 2,000 watts at the rear, this can be boosted up to 2,800 watts to reach the required heat level far quicker than with an electric cooker with a solid plate.

The safety features include a SensorTouch to detect physical touches and disable the hob. Also, there’s a detection system to know when a cooking pot is placed in the zone or not.

Note that Klarstein products originate from Germany. They have an EU electric plug but are pre-supplied with a UK plug converter. Therefore, they can be plugged straight into the UK mains power socket without any issues.

The SIA GHG301BL glass domino hob is the best in the gas category.

It is a twin gas burner hob powered by natural gas. There is the convenient option to either connect to separate propane or butane bottled gas supply using the supplied LPG conversion kit. Therefore, this hob can be installed by a Gas Safe fitter in a home kitchen or equally in a campervan too.

Being a domino hob, the design is much fancier than with an older style design. The black glass surface is somewhat reflective and suits many kitchen styles. It has sizeable physical control knobs at the front too. There are white visual indicators around each knob visible on the black glass for temperature control and indicating which knob controls which hob. It’s also easy to wipe down this hob to clean it.

There’s an electronic ignition system for the gas. Along with this is a flame failure feature to detect the absence of a flame and stop the gas to prevent a leak.

The product comes with a 5-year warranty on parts and 2 years for labour.

The CET300 model from Cookology is a glass and ceramic beauty that’s ideal for people who use electricity to cook with. It comes with a dual heat zone setup, a darling black surface that’s a breeze to wipe down later and plenty of power and control for you.

Unlike some lesser electrical hobs, this one offers 9 power settings to more carefully control the heat you apply at different cooking stages. This domino hob offers 1,200 watts at the front zone and 1,800 watts at the rear zone.

The touch controls come with a child safety lock (hold the setting for a few seconds to lock/unlock), a timer (up to 99 minutes), an automatic cut-off facility, a heat indicator and fine controls on the power supplied to each of the heating zones.

Each hob will glow an orange colour when it’s warming up as a visual indicator of heat, but the digital controls are also very useful in this area too.

A qualified electrician is required to install this product. It does not come with an electric plug.

The Bosch Serie 8 designed in a domino hob style is our recommended single gas hob for natural gas (not LPG). Here, you’ll find high-quality to derive long-term value – it’s not a budget pick.

The black glass-ceramic finish with its attractive trim on either side and Bosch branding at the front sets the tone here. The glass is heat resistant to avoid encountering unexpected hot spots. The controls at the front are not cramped at all with the single hob set back a bit. A built-in flame failure system covers any safety concerns and an indicator lets you know the current heat level at all times.

The burner is a dual wok type, meaning that there’s an inner ring and a larger outer ring to ensure food gets cooked more evenly. Up to 6 kilowatts are useable on this single hob which is considerably greater than most dual hobs that may offer 2-3 kilowatts per hob. On the lower end, the flame level can get down to only 0.3 kW for a careful finish to dishes.

The pan supports are pronounced and designed to carry an oriental wok or a large pan. They’re dark in colour to look good in the centre of the cooking action. Also, they are dishwasher-proof which is appreciated.

The Duronic hot plate is the best portable table top hob. It comes with convenient carry handles on either end to lift it and move it into position. The product is mostly intended to use in temporary cooking situations like outdoor cooking, on a camping trip, or for parties at home.

This electric table top hob has two cast iron hobs – 1,000 watts and 1,500 watts. They can fry, boil, warm, cook or just simmer ingredients to prepare them ready for consumption.

The controls at the front edge include two thermostatic knobs and a light indicator to show when each hob is turned on. No cooking timer or significant safety features are included here, so children must be warned to keep away from the cooker.

The convenience here is that there’s no need to use gas with its open flame. The portability for use in a powered cabin or when camping with hook-ups is the main draw. The Duronic HP2BK also weighs less than 4 kilos, so it’s plenty portable too. However, it’s not intended as a permanent cooking hob replacement.

What size is a Domino Hob?

Domino hobs range is size. However, it’s not unusual to see one that’s around 50cm in length, 28-30cm in width and a few centimetres deep. They usually are fitted over the top of existing cooking appliances or in a new range.

Induction hobs do require special pans because an induction plate must be present at the base. Cast iron or stainless-steel pans work best. Other pans made from ceramics, glass, aluminium, anodised materials or copper won’t be usable.

What’s the difference between Electric, Gas and Induction Hobs?

Induction hobs are clever enough to use magnetism to heat the pan itself without the hob getting hot. They’re fast to heat up compared to electric hobs. Gas hobs (using natural gas) have a gas burner to provide one or two flame rings to heat the pan and the ingredients inside. Usually, they have an electric starter to ignite the gas to create an open flame.

Can you fit a Domino Hob yourself?

Usually, a domino hob must be installed by a Gas Safe or certified electrical installer. Check the individual product for more details.