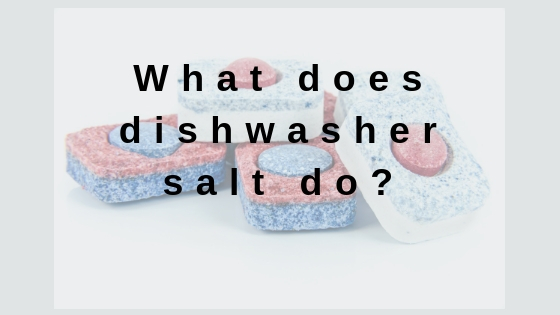 Why Do You Put Salt In A Dishwasher?

Hard water is usually full of calcium and magnesium, and the presence of these elements cause the dishes to have spots that may make you feel like you did not do a good enough cleaning job or like you did not use clean water. You can find out how hard your area’s water is here.

These elements react with dish-washing detergent, resulting in the formation of soap clumps. These then leave behind a residue that causes the dishes to look less clean even after they have been thoroughly cleaned.

The dishwasher salt forms bonds with the calcium and magnesium, eliminating them from the water and make it “soft.” For this reason, the dishes end up being cleaner. The dishwasher benefits from this intervention as well, as it ends up providing a longer life of service. That is because the dishwasher salt gets rid of limescale that builds up in the dishwasher.

This substance is present when hard water is used in the dish washing machine without the use of dishwasher salt. Its build up can cause parts of the dishwasher to malfunction. The limescale is also the reason why dishes end up with spots after being cleaned with hard water. However, the spots and streaks the substance causes is most apparent on glassware.

So, dishwasher salt does not clean the stains that would otherwise form without it as some people believe. Its role is to get rid of the compounds that result in the formation of the water stains in the first place. These compounds are calcium and magnesium ions.

The salt is only used in instances where the dishwashers have a dedicated salt compartment. When this feature is present, you can be sure that the appliance has an inbuilt water softening system. The compartment should be filled with salt and then closed shut, and from there, it is usually ready to use. You should avoid pouring detergent into the salt compartment. This can result in permanent damage to the water softening system.

Dishwasher salt does not come into contact with the dishes. Instead, it flows separately through the softener before going away with the wastewater. Additionally, table salt usually contains additional compounds such as anticking agents and even magnesium salts.

And since the role of dishwasher salt is to get rid of magnesium as well as calcium ions from the waster, using table salt would defeat the purpose of using dishwasher salt to make water more appropriate for washing dishes.

How To Use Dishwasher Salt

Conclusion To Why You Need Dishwasher Salt

If you live in an area where hard water is a problem, then you should always use dishwasher salt. The salt ensures that your dishes do not end up with spots or streaks after they are cleaned.

Additionally, by getting rid of the limescale, dishwasher salt prolongs the life of your dishwasher as it ensures that this compound does not build up in your dishwasher, which can shorten its useful life.